The Wayne County region has a larger workforce than Dayton, Ohio and almost as big as Cincinnati, Ohio. Wayne County’s commuting region consists of Henry, Randolph, Fayette, and Union counties as well as Preble, Darke and surrounding counties in Ohio.

Analysis of the region’s workforce 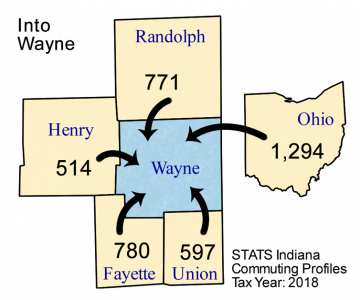 A right-to-work law is a statute in the United States of America that prohibits union security agreements, or agreements between labor unions and employers that govern the extent to which an established union can require employees’ membership, payment of union dues, or fees as a conditio5n of employment, either before or after hiring. “Right-to-work” laws do not, as the short phrase might suggest, aim to provide a general guarantee of employment to people seeking work, but rather are a government regulation of the contractual agreements between employers and labor unions that prevents them from excluding non-union workers, or requiring employees to pay a fee to unions that have negotiated the labor contract the workers work under.