Welcome to Wayne County, Indiana! Located directly on Interstate 70 in east central Indiana, the county shares a border with western Ohio. Wayne County is a unique blend of metropolitan and rural living. Close to 70,000 people call Wayne County home. You’ll find the amenities of larger cities with Cincinnati and Dayton in Ohio and Indianapolis within a two-hour drive, as well as the benefits of Midwestern small town living.

Richmond is Wayne County’s largest city and the economic and entertainment hub. With a population of over 36,000, the city offers a number of diverse activities for just about everyone, including sports and recreation, dining and shopping, and arts and culture. Richmond is located directly on Interstate 70 and U.S 40 (the Historic Old National Road) runs through the heart of the city.

The state of Indiana recently designated Richmond as a Stellar Community. This designation provides potential funding for projects totaling over $19 million to create a downtown where people want to live, invest and visit for entertainment and cultural experiences. The transformation is already starting. Richmond was named a Playful Community and is a two-time recipient of the All-American City award. 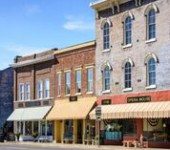 Cambridge City sits directly on U.S. 40 and is only a couple of miles from Interstate 70. Cambridge City is part of a district known as “Antiques Alley” that runs along U.S. 40 in Wayne County and is recognized for the number of antique stores that can be found. Over 1,500 people live in Cambridge City. The Indiana Gateway Industrial Park, home to Dot Foods, Taconic and most recently Sugar Creek Packing Company is located just a few miles outside of town on State Road 1 near the I-70 Cambridge City interchange. The town also celebrates its history each year with Canal Days, a festival named after the Whitewater Canal which ran through the area and on to Hagerstown.

Centerville is located directly on U.S. 40 and just a few miles from the Centerville I-70 interchange. The town is part of the district called “Antiques Alley” and is not only known for its antique stores but also the unique historical arches that characterize much of the downtown architecture. Centerville, with a population of over 2,500 people, neighbors Richmond on its western border and is home to Warm Glow Candle Company whose giant candle feature can be seen from I-70.
Best Place to Raise Kids in Indiana by Bloomberg, 2011

Economy is located on U.S. 35 about 15 minutes from the U.S. 35 and State Road 1 interchange. The town was named by the original landowner who thought laying his property out in lots would be the easiest and most economical way to sell the land. The town was platted in 1825. Now with a population of a little over 185, Economy is the epitome of small town living. Economy is also home to a trailhead for the Cardinal Greenway Trail. The Cardinal Greenway is sixty-two miles long making it Indiana’s longest span of recreational trails. The Trail runs from Richmond, through Wayne County to Muncie in Delaware County and terminates in Marion in Grant County.

Hagerstown is located directly on state route 38 with state route 1 running less than a mile from the town limits. Hagerstown is known for its architecture and one of the largest grass runways at its municipal airport. Nearly 2,000 people live in Hagerstown which is located in close proximity to the Indiana Gateway Industrial Park and the Hagerstown/Cambridge City interchange off I-70.

Fountain City is located on U.S. 27 and in close proximity to Interstate 70. Close to 800 people call Fountain City home as well as the historically significant Levi and Catharine Coffin State Historic Site. Levi and Catherine Coffin were Quakers from North Carolina who were opposed to slavery. They became very active in the Underground Railroad in Indiana. The Coffin family lived in what is now called Fountain City for 20 years before relocating to Cincinnati, Ohio in 1847. During their time in Indiana their house became known as the “Grand Central Station of the Underground Railroad”.  Currently work is being done to expand the house and grounds for the Levi Coffin House Interpretive Center. The Levi Coffin House has been designated as one of the top 25 historical sites to visit in the nation.

The town of Milton sprang up in 1824 and experienced a boom when the Whitewater Canal, built between 1836 and 1847 came through, connecting Cambridge City and Hagerstown via the waterway. Milton sits on State Road 1 just a few minutes away from U.S. 40, also known at the Historic National Road, the first major improved highway in the United States built by the Federal Government. Close to 500 people call Milton home today which sits just a few miles from the Indiana Gateway Industrial Park and the U.S. 40/State Road 1 interchange.